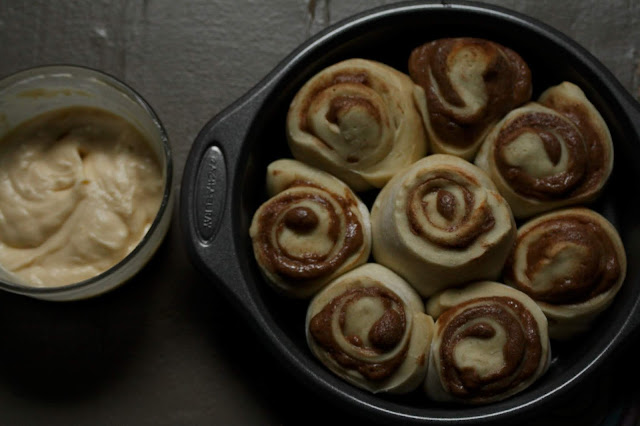 Ok, ALMOST homemade, I used store bought dough from Trader Joe's. The filling and the icing is homemade, though. These are so delish, I can't even tell you and when you make them at home, you can control what ingredients go into them so they are somewhat healthy. These were inspired by the cinnamon buns sold at Trader Joe's-I buy them all the time when I go home and me, my mom and my niece chow down on them. Next up: homemade pumpkin cinnamon buns!


I used Trader Joe's refrigerated pizza dough for these and they are definitely more firm than the buns in the canister. That's fine by me but if you want a softer dough, you can make your own dough from scratch. The best part about cinnamon buns is the gooey center plus the icing so these hit the spot. I was able to spread the dough out enough so that when I rolled it, I made 8 smaller cinnamon buns. 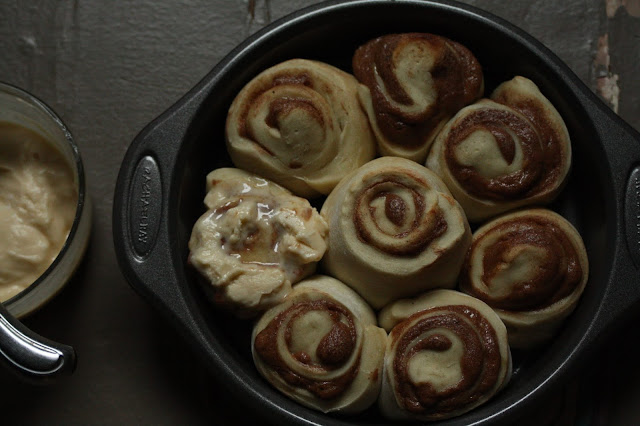 These take some time so I prepared the filling and the icing the night before-then when you are ready to bake them, you only have to worry about the dough. It ends up being very easy and takes very little time once you make the filling and icing. Let the filling and icing sit in the fridge overnight-that's another plus of making them ahead of time. Everything has time to sit and chill and set.

So, I will take you through each step in the order that I completed them.

Mix everything together by hand or in your food processor-I did by hand. Taste it and make sure it's sweet enough and make sure there is enough cinnamon or pumpkin spice. Let sit in the fridge overnight in an airtight container.

Mix well by hand. If there are lumps from the butter or cream cheese, let sit on your burner pilot area until melted then stir. Store in the fridge overnight, covered. 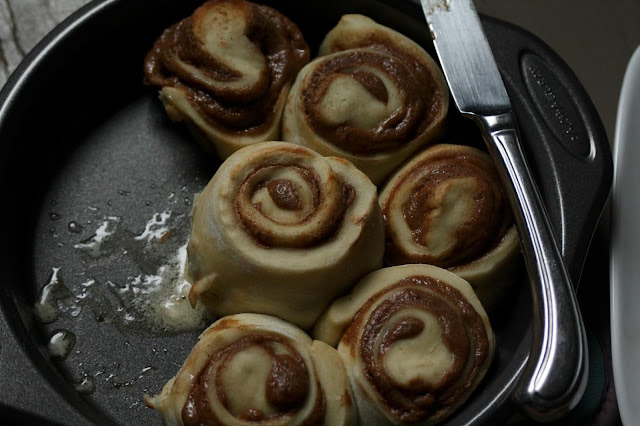 The next day I made the buns and baked them.

Take the dough out of the fridge, take it out of the plastic and let sit 20 minutes. Sprinkle some flour or arrowroot powder on top of your workspace and the dough so that the dough doesn't stick to your counter.

Set your oven at 425 degrees. After 20 minutes, spread out the dough, stretching it into a small square. Take your filling out of the fridge and spread the filling on top of the dough making sure it's very spread out all over the dough. Roll the dough into a tube and using a very sharp, wet knife, cut the roll into pieces which will be your cinnamon buns. Flip the buns so that the cinnamon filling is showing and place in a round baking pan. Bake at 425 degrees for 6-8 minutes. Spread the icing on right away or when they cool. 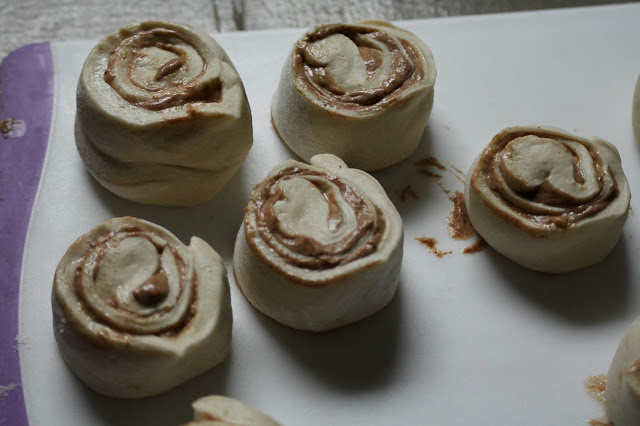 I am using the directions on the dough packaging. If you aren't using Trader Jo's pizza crust, your directions may vary. You can google no yeast homemade dough t make your own.

Note about medjool dates: Trader Joe's had no dates when I went to make this recipe but you can use soaked dates instead of maple syrup for the filling sweetener. Soak a cup of dates in hot water after you pit them. After soaking, put the dates and the rest of the filling ingredients (no maple syrup) into your food processor and process on high until the filling is smooth. Store in the fridge overnight. The filling will be more gooey when you use dates.

All pictures were taken by my Canon EOS digital camera instead of my phone so I'm especially excited about that. It's cloudy today so the pictures are not as bright-I'm learning how to set up the camera so there is enough light for the pictures to turn out looking somewhat professional. 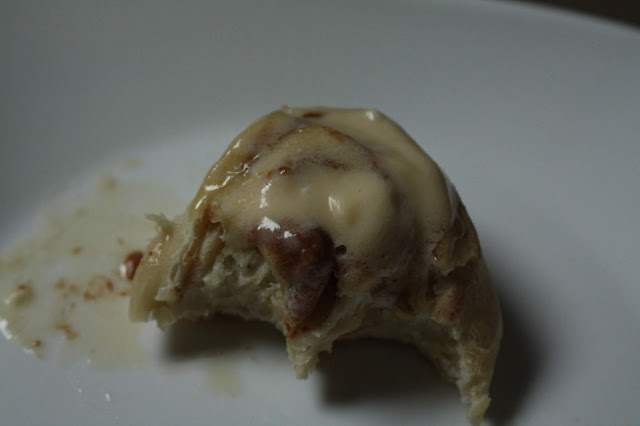