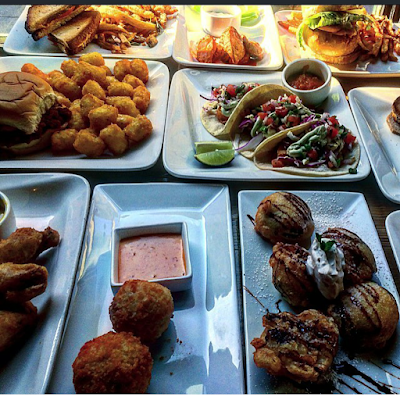 Ever wonder how cool it would be if you could go into any restaurant and order a vegan dish? Where you could order the tiramisu because it was totally vegan? Or not have to worry about meat in your pasta sauce or dairy ending up in a sauce? This is happening in NYC by Kiki Adami and Hadara Slok, two dedicated vegans who help different restaurants in the city create an entire vegan menu for one night.

I had the pleasure of dining at Pagani in the West Village and Keg 229 when their menus became everything a vegan in NYC could ever dream of...vegan meatballs, plant based cheese plates, fried pickles, vegan burgers, mac and cheese and more. YUM! I spoke with Kiki Adami to find out more about her background with veganism, how Veganizer came to be and where she sees the future of Veganizer NYC. Kiki is an upbeat, super friendly and ambitious woman who is going to make her mark in this world! I'm very psyched to know her and to be a part of the vegan community in NYC.

How long have you been vegan?

What motivated you to adopt the vegan lifestyle?

My mum became very sick which led me to raw food. Then I became more and more ethical over the years and now I'm pretty much ONLY an ethical vegan.

How did Veganizer NYC begin?

It all started when my mom got sick and I radically changed my diet to avoid her same fate. I was a radical raw foodist and passionately advocating to my Argentinean friends to be totally raw vegan (I lived in Buenos Aires). I was always extremely passionate about helping others see the truth or experience the life transformation that I experienced.

When I came to NYC, I worked at GustOrganics and I started telling my guests that they should only order the vegan items on the menu (Gustorganics was Paleo when I started in 2011). I also began expressing myself to management that GustOrganics was, in fact, NOT GREEN at all because it served mostly meat--regardless of it's organic food and compostable items. I suppose I was trying to veganize GustOrganics before the idea of veganizer even popped into my wacky brain.

In 2012, I started dating one of the Gusto partners, moved to NYC permanently and that's when the lightbulb went off and I realized I might have an opportunity to veganize the restaurant. I successfully veganized the restaurant and we did well for a while. After problems with the restaurant investors, Gustorganics closed but I kept my dream of veganizing restaurants alive. I knew in my heart it was bound to happen, I just figured maybe I was ahead of my time and eventually the other restaurants or the movement would gain enough momentum for me to make this a successful thing. And so Veganizer NYC was born.

What is the process when you veganize a restaurant?

Convince the restaurant owner and talk to them about veganism, create marketing material, design the menu, promote the restaurant, connect my chef with the restaurant chef, film the process, meet with the staff, create commercials, do photo shoots, sell tickets, select the charity, make sure the chef is prepared with recipes and finally, manage the night of the event. I promote the event on my Instagram (VeganizerNYC), facebook and through Facebook invites.

What is the best part about the vegan scene in NYC?

Sheesh, tough question! I like how connected we are. We all know each other. It's like we symbolically represent NYC. Everything in NYC is dense. There are millions of people stacked on top of each other and it's impossible to avoid other humans. NYC vegans CANNOT avoid each other because we are just so connected and it creates a serious support system.

Where do you see veganizer in 2 years? What is your goal for it?

I want veganizer to be happening in every major city in the USA....Call me :)

What other info do you want people to know?

You don't need to have the name Kiki Adami or Hadara Slok to be a veganizer. If you are in a food desert somewhere in the USA, which is most people, then don't be afraid to just speak up in omnivore restaurants! Be demanding! Make them work for your dish so you expand the chef's veggie creativity.

A group of my vegan friends and I met at these restaurants and dined on really awesome food and vegan beer and wine. The events were both on Monday nights and were very crowded! I saw some of the same faces I see at most vegan events but it was also a great chance to mingle and meet new people. The atmosphere is so upbeat and the crowd is great; it's wonderful to see vegans and non vegans enjoying amazing food together. To find out when the next event is Follow Veganizer NYC on social media and the web.

Now it's time for pics of the amazing food. Some pics were taken by Kiki Adami and her Veganizer crew-thank you for the amazing photographs!