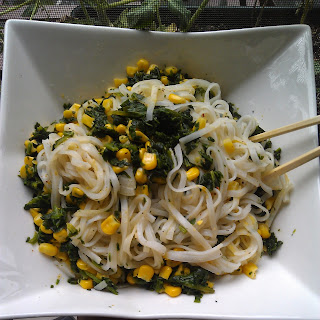 To say I'm loving this rawtill4 eating plan would be an understatement.  I lost another 3 pounds and I feel full at the end of the day.  I'm also keeping up with the yoga, running and weight lifting.  This weekend I'll be changing things up a bit because I'll be on a mini vacation in the Poconos but I plan to be as raw before 4PM as I can; I just need to stock up on lots of fruit before I go.  I won't have my blender though with me so I may take a break from the smoothies and nana ice cream, which is hard!


I had two super awesome recipes that I made this week for dinner and I wanted to pass them on.  The first one I made was a bed of Thai rice noodles with veggies, vinegar and some spices.  For rawtill4, you need to avoid oil and salt, which can make cooking veggies a little tricky so I end up steaming everything.  I'm also throwing in powdered garlic instead of fresh and also adding dried spices.  People do sautee some fresh garlic in water and veggies but I have not tried that yet.  The Thai rice noodles are sold in the international section at Whole Foods or you can look where the asian soups and seaweed are in any grocery store and you will find them.  They are plain white noodles and they usually come in a clear plastic bag.  I steamed frozen spinach, fresh spinach and frozen sweet corn-all organic- while the noodles were boiling.  Lastly I added my spices.

1. Boil water for the noodles.  Make sure the water covers all the noodles.  I had a big bag of noodles to make because they were sitting in my cabinet for a while and I wanted to use them up.  You can usually cook these noodles the same as you would spaghetti although they do not take as long.  The noodles are done when they are tender so taste them and stir frequently.

2. While the noodles are boiling, put any veggies you want in your steamer.  I originally thought my frozen spinach was broccoli until I poured the bag into my steamer.  Broccoli works, sweet peppers, onions and kale work too.  Steam away!

3. When the noodles are tender, transfer them to a strainer and pour the water out.  Transfer the noodles to a bowl.  I used rice vinegar and coconut vinegar to spice the noodles up.  I poured in each of the vinegar and fluffed up the noodles, mixing them well.  They are rice noodles so they stick together quite easily.  Then I spiced them up; I used Trader Joe's 21 seasoning (salt free) and some powdered garlic.  You can also add lemon or lime juice.

4.  After the veggies were done steaming, I added them to the noodles and mixed them in, adding some extra vinegar to them also.  Top with some more spices as you see fit and go to town!

These are non-GMO and organic; I went to Whole Foods and bought a box of their brand of taco shells. They have the non GMO verified seal on them and the organic seal not only by the USDA but also by an independent stamp of organic approval.  I had two sweet potatoes left so I steamed them and then made my guacamole.  Same spices were used as in the Thai dish.

1. Take out two-four tacos shells and place them on your counter.  You can heat them in the oven if you wish but I skipped that part.  Slice and cube the sweet potatoes and steam them until you can get a fork through them easily.  Transfer them to a bowl and mash them up.  Add nooch and some salt free spices and seasoning.

2.  Take out romaine lettuce and chop it into small pieces.  I used 1/2 avocado for the guac but I suggest using a whole avocado.  Make my guac, recipe here

3. Fill the tacos with romaine lettuce, then scoop some of the mashed potato on top them add the guacamole.  If you have leftover filling, eat that plain if you don't want to eat more than 2 or 4 tacos. 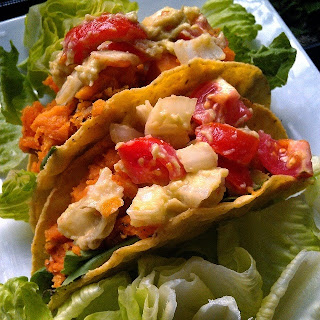 I will be making a pizza but I'll put that recipe in my next cookbook!  I already have an idea how I'm going to make the pizza high carb, low fat and gluten free.  Also with the rawtill4 plan, you want to eat gluten free corn based doughs because they are minimally processed.  And as always with corn, you want to make sure it is organic and therefore GMO free.

For my other dinners this week, I had sushi out at a restaurant one night and then two nights I had baked apple and banana oatmeal; if I have not blogged about that, I will post that recipe because it was delish!!