The Seed: Positively Plant Based 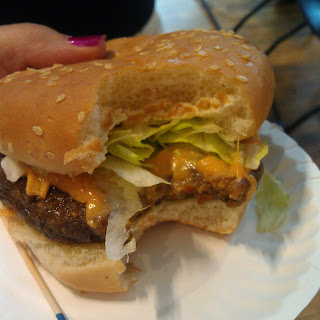 At the last minute, I attended The Seed event on Saturday August 9th and I had no idea how inspiring it was going to be!  There were vegan businesses everywhere, plenty of vegan food, there were inspirational speakers, demonstrations, and many products to buy and sample, I had so much fun.  I also met a fellow Instragrammer who I connected with since moving to this awesome city (Hi Annie!).  I actually attended this event because I saw Annie was going.  What a wonderful day and I can't wait to share the details with you.


I got there late because I was waiting for my landlord to install my new fridge!  I got there and waited in a long line; we had to wait for people to leave before we could get in.  It wasn't too long of a wait though and finally I got in and just couldn't wait to go around to each table.  I made it to almost everyone's table and I chatted with everyone there.  So many awesome food samples, drink samples, chats with animals rights groups about veganism and why I became vegan.  It was so nice being in a roomful of people who are dedicated to saving the animals as much as I am.

Some of the businesses I connected with and and enjoyed a sample of their product were:

Whole Foods (a sponsor of the event) they were giving away samples of their basil, kale and walnut pesto crostini and they were delish.  Follow @wholefoodsnyc on IG and Twitter for Whole Foods updates.

Explore Asian gluten free and organic soups, pastas and noodles-I tried their mung bean fettuchini and it was out of this world, I regret not buying some pasta to bring home! Fb @exploreasianpastas Twitter @explore_asian IG @exploreasian

Gardein they were giving out samples of their sesame mandarin chik'n and I kept going back for more.  I spoke to one of the Gardein  employees who was so sweet, she gave me her card and a coupon for a free bag of Gardein-I can't wait to use it! FB, twitter, IG @gardein 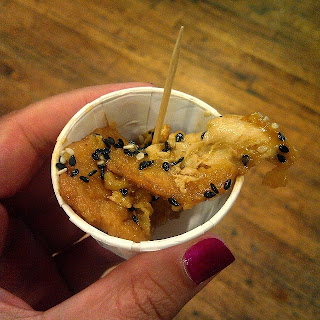 Fairy Bites bite sized vegan chocolate chip cookies.  They were so soft and chewy, a true example of how yummy vegan cookies are. They are on IG @fairybitesvegancookies

Chai Mookie-healthy to a tea!  I tried their chocolate and espresso teas and they were pretty tasty, the chai flavor is so strong.  IG, Twitter, FB @chaimookie

The Love Kitchen one of the first booths I went to and chatted with Kris, the owner.  She gave me a mini cupcake to taste, it had strawberry icing, so delish and the strawberry taste was so sweet and fresh.  She also gave me a vanilla ice cream sandwich that was to die for.  So fresh and creamy, I loved it.  They were on IG @the_lovekitchen 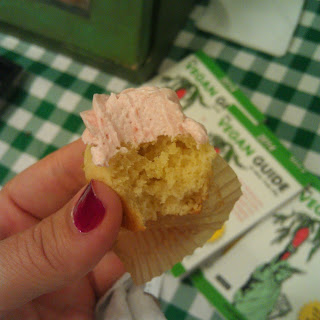 Beyond Sushi I went to this sushi place a few weeks ago with my friend after we did yoga and I couldn't believe how creative they are with vegan sushi.  The grains they use for the rolls are so healthy and they top your sushi with creamy sauce you're sure isn't vegan but it is!  The sushi roll combinations are just out of this world and I definitely will visit this place again.  They are on 14th st near Union Square and also at the Chelsea Market.  They are on IG @beyondsushinyc 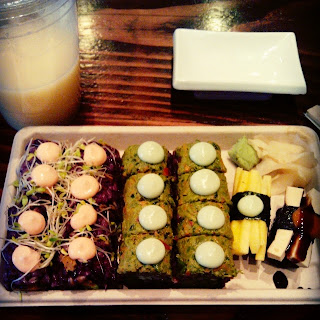 The Regal vegan they were selling wonderful food that they were cooking right there.  I ordered the summer vegetable pie and it was a delicious, spicy lunch-very good!  They were a catering company and they also offer classes.  They are on Twitter and facebook @regalvegan 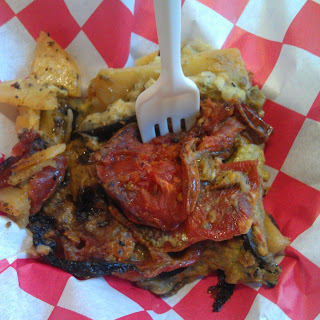 Michele's Granola finally a vegan granola!!  Michele was lovely and gave me a sample of her original granola recipe, it's so yum.  You can find her on Twitter @michelesgranola 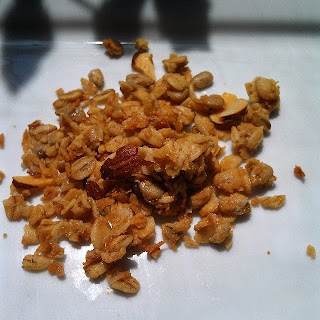 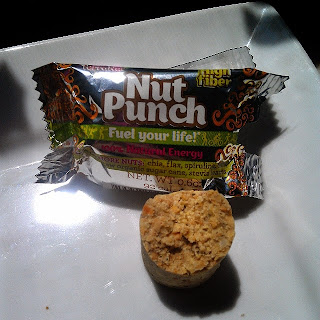 DF Mavens dairy free ice cream...I went back for seconds and was thinking about thirds...I sampled their praline and mocha, so rich and creamy, it's so hard to believe it's dairy free. IG, Fb and Twitter @dfmavens 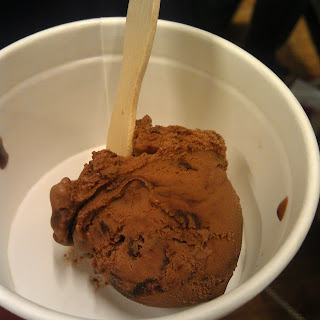 Jar Goods all natural tomato sauce.  The Jar Goods employees had bread dipped in the sauce and I tried some and it was a very tasty sauce.  All natural ingredients, very fresh.  Visit their website to find out where to buy in NY and NJ. Twitter and IG @jargoods

Vegan Fashion!  Loiseastlund sold these bags with adorable sayings on them about yoga and being vegan.  Of course I had to buy a mini vegan pouch :)  IG, fb and Twitter @loiseastlund 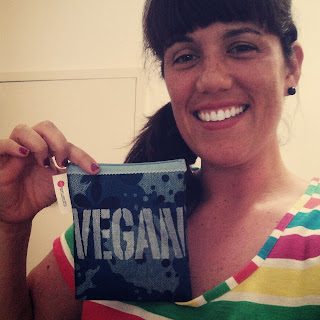 Veganfastfoodny.com they sold this burger..seitan with vegan cheese.  It was soooo yum even though I was already full from everything else I ate!  I could not resist getting this. Twitter and FB @veganfastfoodNY

One of the speakers was Gene Baur, the founder of Farm Sanctuary.  He spoke about his vegan journey (he's been vegan since 1986!) and talked a little about factory farming and what it's doing to the animals and our planet.  It was a very inspirational talk and he got a standing ovation.  I want to visit Farm Sanctuary someday! Check them out Farm Sanctuary
The other animals rights groups were: Catskills Animal Sanctuary, Woodstock Farm Sanctuary, Sea Shephard Conservation Society, Mercy for Animals, Evolve for Animals, New York Coalition to stop Horse Abuse

It was an overall fun day.  I was totally inspired and was envisioning the business that I want to build from FVR.  I handed out all my business cards explaining my blog and talked about vegan lifestyle.  It was a such a joy to attend this event and maybe next year I will be a participant :)