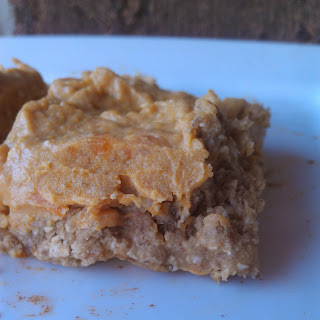 A friend told me about this dessert she bought at one of her local coffee shops and asked if I ever made something similar. I'm finally getting around to it and they turned out so delicious. But when sweet potato, cream cheese and pumpkin are involved how can they not turn out delicious???

This recipe is not raw because I used store bought cream cheese and the sweet potato was steamed but you can make it more raw by making your own cheese with cashews. I didn't have any cashews and I also needed to use up my open cream cheese. I used the Daiya brand and it was delicious.
Make this recipe while you are steaming a sweet potato anyway. By the way, steaming sweet potatoes is an oil free endeavor plus it takes very little time for the potato to be done. It's my new favorite method to cook potatoes. I have a basket steamer so I filled a large pot with water, cut up the sweet potato and steamed it on high with a lid on the pot. It was done in no time. What a great method to make potatoes.

I was making a sweet potato and broccoli dinner while I made these bars so it was minimal clean up.
Ok, for this recipe, you'll need:
1/2 cup of vegan cream cheese
1/2 cup of pumpkin puree
1/2 steamed, peeled sweet potato
2 tbsp of maple syrup (optional)
2 tsp of vanilla extract
Cinnamon
6 dates
1 cup of oat flour
2 tbsp of coconut oil

Crust: combine 6 soft dates, coconut oil and the oat flour in your food processor and process until you have a soft, sticky crust. Press the crust in a small pan. Line the pan with wax paper first if you are putting in the fridge. The crust tends to stick to the pan because of the dates.
Filling: combine the cream cheese, pumpkin, sweet potato, cinnamon, vanilla extract and maple syrup in a bowl and mix. I say the maple syrup may be optional because the sweet potato should be sweet enough. Add the maple syrup after you've mixed the other ingredients and tasted it. Or just add a whole sweet potato.