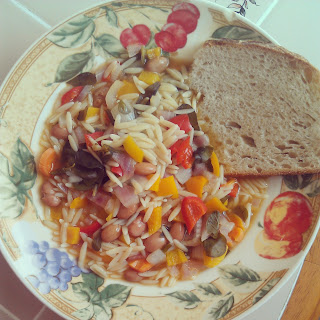 I know it's summer but I've been thinking about making soup ever since the heatwave broke.  And with the little taste of fall we've had, I'm ready for some cooler weather recipes.  I was going to make this soup in my crockpot but I started cooking later than I wanted to.  But this is a great crockpot recipe so feel free to make this the night before and turn on your crockpot before you leave for work.  Here is everything I threw into my soup!

Put in any veggies you want just make sure you put beans in the soup.  You don't have to have pasta either.  Add or delete any of my ingredients to your soup.  I also used veggie broth and water.  I boiled water for the pasta and cooked that before putting it into the soup; I wanted to make sure the pasta was cooked al dente.

I added all of the above ingredients to a big pot after cutting all of the veggies up in small pieces.  I turned the heat on medium and cooked the soup with the lid on the pot for about 45 minutes.  Serve with Italian bread.

When boiling the pasta, undercook it a little bit because you will be putting it into the soup and it's going to cook in there too.  Don't overcook the soup because you have beans in it.  Enjoy!!